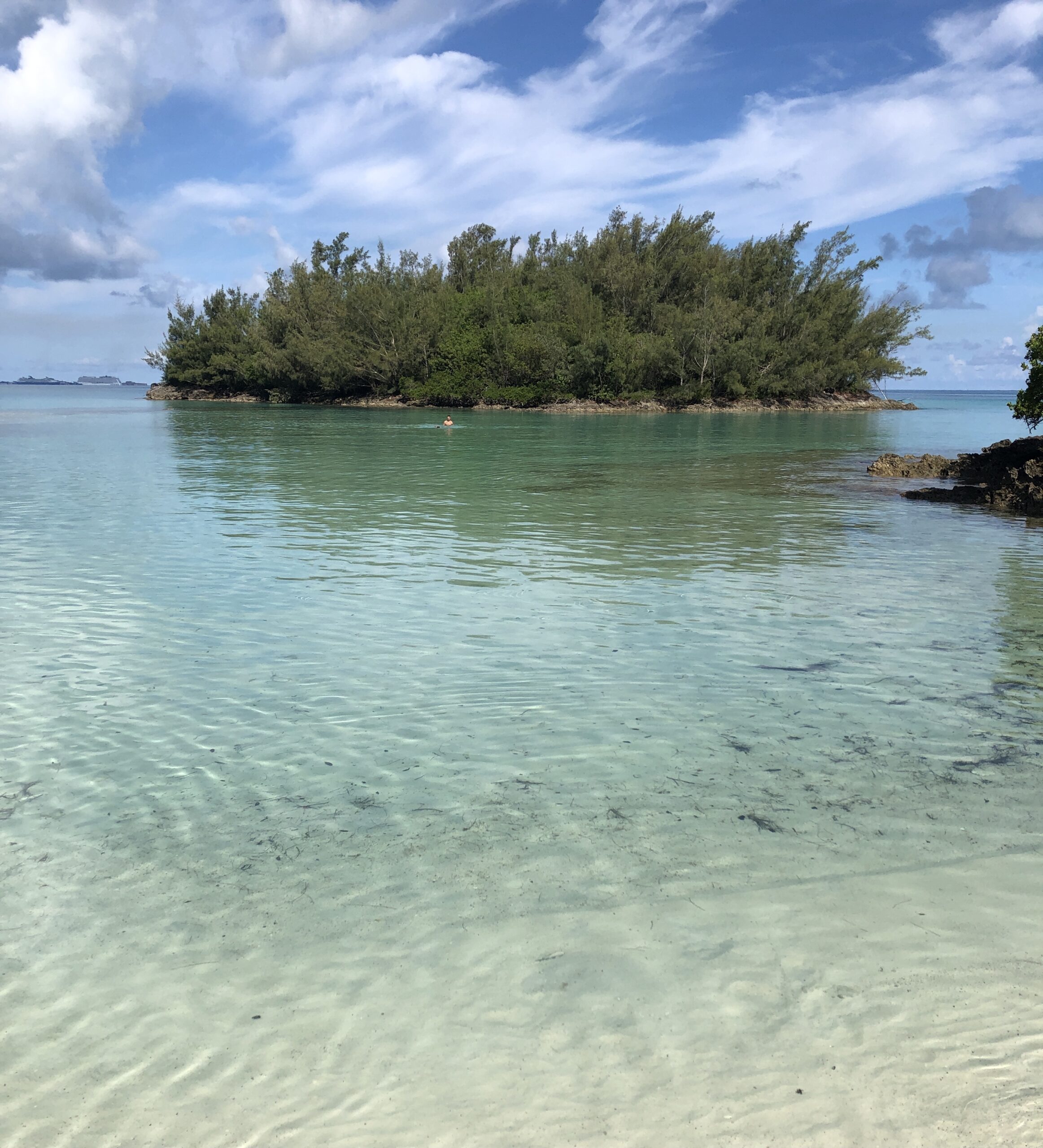 We stepped off the plane to a haze of heat. The sky was a brilliant blue and the thinnest of breezes the only indication of the ocean nearby. It was August and we had come to Bermuda to visit family. But for me, this was more than just a family holiday; it was also an opportunity to see Bermuda through the eyes of Amy Mello.

I had already heard a lot about Vicinity House – the home that Amy built in the 1930s – but had never seen it. This visit was my chance. Being Bermuda, my mother-in-law knew the people who lived there. So, one sunny morning, we drove down a narrow lane to the very end where a house, now painted cream with green shutters, stood.

In Amy’s time, it had been pink and red – a colour combination that, even by Bermuda standards, was daring.  Very little else about the home had changed; the porch where Amy’s mother used to sit was still there and, inside, many of the features familiar to my mother-in-law’s childhood were present: the small kitchen with the large breakfast bar and intricately decorated cupboards, the dark wooden staircase whose railings Amy’s grandchildren, Karen (my mother-in-law) and her sister, Diane, had been made to polish, and the bookcase of the same dark wood in the hallway.

Even the layout was the same. Karen pointed to where Amy had once sat watching her soap operas and to the dining room where the family had gathered for celebrations and Sunday dinners. Our timing was fortuitous as the owners of the house were soon going to be renovating it and much of the features Amy had lovingly planned would be gone.

Having finished our tour and with the heat growing, I insisted on a couple other stops. I dragged my mother-in-law and four year old daughter to the cemeteries where Amy and other relatives are buried. Amy is buried in a vault with several other family members. It is bright white, low lying and rectangular in shape. Most notably, it is devoid of any indication as to who is buried there. This seems to be a common style of burial in Bermuda as there are rows of these vaults, each with a different family in them – some are named but most are silent about the occupants within.

The wider Mello and Simons family, however, were more considerate to future genealogists and their burial sites are marked with traditional tombstones. This enabled me to embrace my Burne genes and I wandered ‘happily’ around this cemetery searching out family names. I was hoping to solve an unanswered question over the fate of one of Amy’s young nieces, however I didn’t find a trace of her. I should probably consider this a good thing but I was, perversely, a little disappointed.

We headed home passing the orange house that Amy’s best friend, Mary, had lived in. It is at the bottom of a steep road and, on several occasions, she had had cyclists misjudge the gradient and end up in her garden!

Amy’s life was as much about Massachutsus as it was about Bermuda. Unfortunately, time and budget have yet to allow me to visit these personally. However, Diane made several trips to Cambridge while I was researching Amy in 2018 so I sent her a list of addresses to investigate.

We discovered that many of Amy’s residential buildings have disappeared to the march of progress. However one house, where Amy had lived with Jose, was still there although it is now apartments. It looks like it has been modernised and, I imagine, is now larger than when Amy was there. Behind the house, an old warehouse looms and we think it was the one that Amy and Jose worked in. This location would have made for a commute most city-dwellers would be envious of. Additionally, opposite their house was a Portuguese meeting hall. The combination of these remnants to work and community was a good reminder as to why Amy and Jose would have chosen this part of Cambridge. It is an aspect of Amy’s life that I explore in my book.

The photos of Diane standing in snow, wrapped in coats and scarves, is in stark contrast to the humidity of Bermuda. Despite living in the USA for over 10 years, I can’t help thinking that Bermuda was a balm for Amy after the trials of her American Dream. If nothing else, having moved at least 7 times over 10 years, she went back to Bermuda and built a permanent place that she called home for the next 30 years.